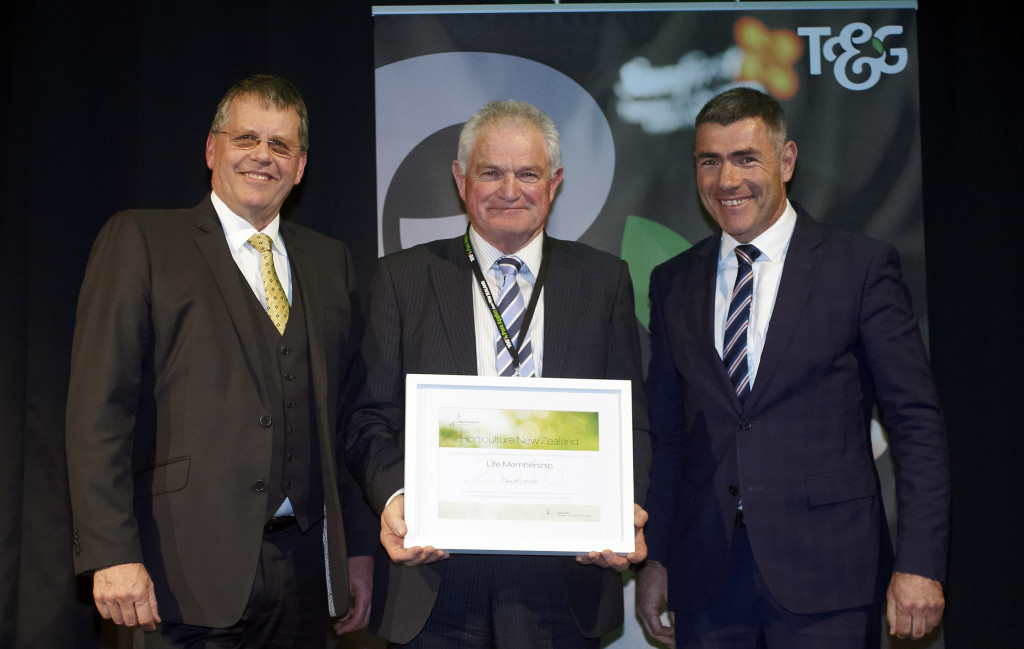 The dedication and contribution to industry of Levin asparagus grower Geoff Lewis was acknowledged at the Horticulture Conference Awards Dinner on Thursday 4 August. Geoff was awarded Life Membership of Horticulture New Zealand.

The Life Membership of Horticulture NZ is awarded to persons that have provided distinguished and honourable services to Horticulture NZ and continues for the life of the recipient.

Presented by HortNZ President Julian Raine and Minister for Primary Industries the Hon. Nathan Guy, Geoff’s citation, which was compiled by many people who have worked closely with Geoff over the years, reads as follows:

When Geoff Lewis was chair of the Asparagus Council and the National Labour Governance Group, he was always enthusiastic and keen to listen and consider other’s views. What typified Geoff was that whatever he was involved in it was not about him, but for the common good.

As an employer, he was an early adopter of Approved in Principle Scheme, which became the very successful RSE scheme, and passionately believed in not only what the scheme could achieve for horticulture, but what it could achieve for Pacific Island workers and their communities, while simultaneously supporting New Zealanders into seasonal work.

Practicing what he preached, Geoff found innovative ways of motivating local New Zealand workers to engage and have fun, and truly enjoy their work. He championed the need to provide good pastoral care to RSE workers, and became the independent chair of the National Labour Governance group in 2009. Holding the role until 2015, he ensured that the RSE scheme became an essential tool for the horticulture industry, and worked hard to build a strong relationship between government and industry.

Thank you, Geoff, for all you’ve done.